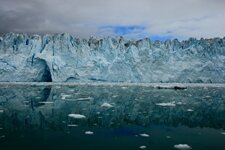 Supposedly this is a place that must be visited during your stay in Greenland. It is said that it is worth every penny spent.

Uncommonness of Ilulissat comes from the town’s location at the mouth of the 40 km long ice fjord Ilulissat Kangerlua – the most productive glacier – 20 million tones of ice per day! The front of the glacier is over 80 meters above sea level and stretches for over 5 km. The iceberg produces hundreds of icebergs which can be seen at the horizon of Disko Bay. From time to time one can notice 10 meter high waves which are results of parts of ice coming off.

300 km north from the polar circle guarantees the midnight sun and spectacular constant sun rises and sunsets. The one who saw “Insomnia” with Al Pacino and Robin Williams knows how tricky may be the lack of night and sleep.

Ilulissat is one of the biggest towns in Greenland. There are about 5000 people living today and nearly twice the number of sled dogs.

The beginnings of Ilulissat are dated back to about 2000-1500 B.C. when the surroundings of Ilulissat were inhabited by people from the Saqqaq and Dorset wave. One of the remains from that period are the ruins of a village – Sermermiut, which is about 3500 years old. Till today the surroundings of Iluissat are inhabited by Inuits. Of course the first Europeans who visited this land were Scandinavians, who arrived there in search for seals and walruses. In the XVII th century Danes marked their permanent presence, who established the base for their whalers. 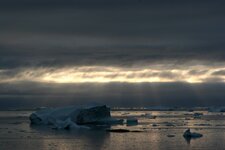 The town was established in 1741 by a Norwegian missioner Poul Egede.

It is worth mentioning that the waters of Disko Bay were the witnesses on the only sea battle that took place at the coast of Greenland. The battle was between the Dutch whalers and the Danish military units after the Danish King introduced the Danish monopoly for trade in Greenland.