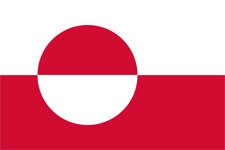 Greenland in the language of the Inuits means “Land of People”

Greenland is the biggest island in the world. Some scientists claim that the ice cap covering the country may conceal three seperate island bridged by a glacier. The total area of Greenland is over 2100000 sq m that is seven times bigger than Poland.

Greenland is an autonomous constituent country within Denmark.  Currently Greenland is trying to seperate from Denmark as an independent country. The Greenlanders set their hopes on global warming, which will enable them to extract natural resources.

Geographically Greenland is a part of North America.

The highest mountain is Gunnbjornsfjeld – 3693 m above sea level. Most of the mountains in Greenland are nunataks – peaks covered with ice within a glacier. The word in the Inuit language means “Black Rock” which fully gives the contrast between the mountain and the glacier.

Most parts of Greenland are covered by ice sheet. The thickness of the ice cap is about 2 km. The ice free area makes less than 20% of the area and is at the coast of the island. There is hardly any agriculture.

Such big area is inhabited by a little over 57000 people. The population rate is positive although very low. In combination with the emigration of Greenlanders the island is slowly becoming depopulated. A statistical Pole lives 5 years longer than a statistical Greenlander (70,07 years).

Most of the population is of course Inuits. Only 12 % are Danish and other nations.

The capital of Greenland is Nuuk, but believe it or not most planes fly to another city – Kangerlussaq.

The only way to travel across Greenland is by air or sea. There are basically no roads. Only in cities and towns you may see cars travelling within these cities. The biggest air carrier is Air Greenland. There are also flights from Reykjavik by Air Iceland and Copenhagen by SAS. Sea transport is served by coastal ferries operated by Arctic Umiaq Line A/S.

The northeastern part of the island is the site of the world’s biggest national park – which covers 1/3 of the island’s area. To enter the park you need suitable permits.

In the northeastern part there is also an American Military Base Thule. Unfortunately the presence of the American army is connected with a plane crash – the plane was transporting atomic bombs. As a result of this crash part of the territory was contaminated and the consequences are still perceptible. Probably one of the bombs was never found.